For three million working Wisconsinites, wages are the most important measure of the quality of their jobs.
–

Despite the global pandemic and the restructuring of every aspect of work and life in response to it, wages continue to provide an essential lens on job quality and inequality in the state. 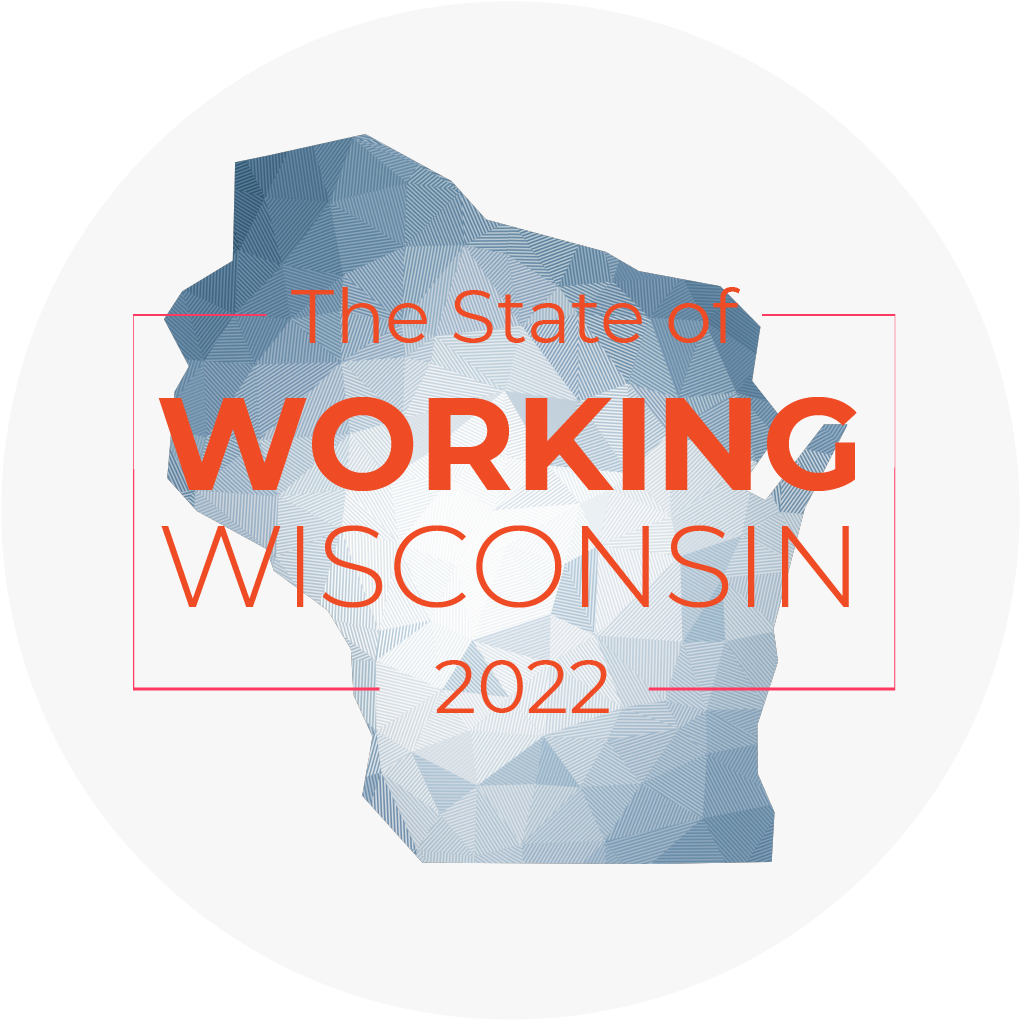 This section of State of Working Wisconsin 2022 relies on the most recent data available from the Current Population Survey (CPS), providing median wages through 2021. Additionally, this section offers wage trends over the course of the pandemic and critical context from the last 40 years.

From the end of World War II until the 1970s, median wages were closely tied to overall economic growth. As the economy grew and productivity increased, workers’ wages advanced. This was the period of “shared prosperity,” when growing GDP was linked directly to growing paychecks for workers.

In the 40 years since, wage trends have contradicted the norm established during the post-war period.

Jobs Matter More in the US

In the US, the quality of your job is directly linked to your well-being. Higher-wage jobs deliver good benefits, including health insurance, retirement, and leave. Lower-wage jobs not only provide smaller paychecks, but also tend to offer volatile and insufficient hours, weaker or no health insurance, and little or no paid leave. This would surprise workers in most advanced economies, where health insurance is a right of residence and work hours and paid vacation are guaranteed by law.

The Gap Between Wages and Productivity

Despite substantial productivity and education advances over the last quarter of a century, median wages have only slightly increased for workers.

W.1 shows the national picture. Wages and productivity diverged in the early 1970s, breaking the presumption of the inevitable economic advancement of each generation of Americans.

Since 1979, total economy productivity is up more than 62 percent in the US, but hourly pay for nonsupervisory workers is up by just 18 percent.

We know that in the state and in the nation, productivity is up. But workers don’t see the reward.

The 1980s – especially difficult years for Wisconsin – brought considerable real and relative wage decline, leaving Wisconsin workers nearly a dollar per hour behind the US median.

W.2 displays median hourly wages for Wisconsin and the United States from 1979 to 2021. (Inflation is accounted for; all values are expressed in 2021 dollars.)

In 1979, Wisconsin’s median worker earned a wage well above the national median, but the state lost ground in the 1980s.

Wisconsin moved back to the national median wage in 1995 and wages rose slowly from there until 2005. In 2012, the Great Recession brought wages in the state to the new century’s low point. Since 2012, Wisconsin’s median wage has been rising. In the last three years growth has been especially strong.

W.3 shows how wage inequality has changed in the last 40 years. In 1979, men – white men, Black men, and Hispanic men – posted the highest wages. White men’s median wage, $24.40, was the highest, with Black men at $20.99 and Hispanic men at $19.24 per hour. These wages were substantially higher than the median wages of all three groups of women at the time.

From Gender to Racial Disparity

In 1979, the labor market was marked by a clear gender disparity. By 2021, the disparity of race and ethnicity were more pronounced.

From 1979 to 2021, men’s wages fell and women’s wages grew. The most dramatic gains have been for white women and Hispanic women, whose median wages over the four decades are up almost 50 percent and 35 percent respectively. Black women’s wages have risen by almost 10 percent. Men’s wages are down: slightly for white men (5 percent decline), with a greater decline for Hispanic men (down 11 percent) and a substantial decline for Black men (down 16 percent).

W.5 shows that strong wage growth across the last two years has closed some of the state’s pronounced racial and ethnic disparities.

There are two explanations for strong wage growth over the last two years. First, sustained economic growth that preceded the pandemic finally showed up in workers’ paychecks. This is unambiguously good news for workers.

A more ominous factor was also at play in increasing wages in 2020. COVID shutdowns disproportionately displaced low-wage workers — particularly restaurant, bar, and hotel workers who lost jobs during the shutdowns. Median wages rose during the shutdowns because lower wage workers lost their jobs. This likely also explains part of the dynamic in wage growth in 2020. As lower wage workers returned to their jobs in 2021, this compositional impact has faded.

In 2021, Wisconsinites with a bachelor’s degree or more earned a median of $29.24 per hour and workers with associate degrees earned $22.04 per hour. Medians for both groups exceed the current state median wage of $21.55 per hour.

Over the last forty years, the pay-off to higher education has grown substantially. In the last two years, wage growth has been stronger at the bottom of the education distribution, closing some of the gap.

These wage data make the impact of the state’s higher education system clear. College degrees from the UW System and Wisconsin Technical College System increase earnings for workers across the state. Time in college without a degree has little impact on earnings (note the median for those with some college is just slightly higher than for high school graduates). The higher education wage pay-off is largely reserved for those who complete associate or bachelor’s degrees.