Since the abrupt shutdown in March 2020 the economic recovery has been impressive. Nationally, the labor market is fully recovered and in Wisconsin the labor market is tight. This is evident in low unemployment rates and help wanted signs. Even so, opportunity has not reached all industries, workers, or locations equally. 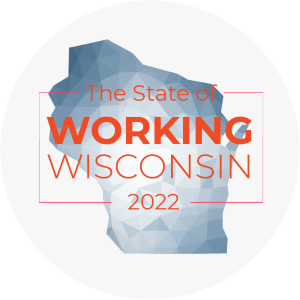 Nationally – and especially in Wisconsin – “nobody wants to work anymore” falls flat.

Workers across Wisconsin are seizing the opportunity provided by a strong economy, leaving some employers scrambling to fill jobs. A year ago, this trend was mischaracterized as “the great resignation.” It is more appropriate to think of it as a “great renegotiation” or “great reallocation.” National data shows that hires exceed quits in all sectors which means that workers are taking the opportunity in this labor market to find better jobs.

Workers aren’t moving out of work, they’re moving up.

There is no evidence of a retreat from work in Wisconsin, where total employment reached a historic high of 3,059,300 in May 2022. Still, the “great resignation” myth has remarkable staying power in the public mind and with some pundits who continue to suggest that Wisconsinites aren’t interested in work.

Wisconsin’s “labor force participation rate,” which measures the share of the working age population that is involved in the labor force, registers over 66 percent (66.4% in July 2022). This figure is higher than before the pandemic, and well above the national rate of 62 percent.

It is not laziness or a great resignation that has tightened the labor market. In fact, the state’s demographics are a central issue. Wisconsin is aging. As an analysis from UW Community Economic Development shows, the state had 150,00 fewer residents in their “prime working age” (from 25-54 years old) in 2019 than in it did in 2010. The labor force will continue to shrink in the coming decade, leaving public and private employers fighting over the smaller pool of potential workers.

Employers’ difficulty in filling jobs is not about Wisconsinites being dependent on government handouts. It is about the workforce shrinking as more age out of work than come into it. This shift is especially acute in the state’s rural counties where the aging workforce is most concentrated.

Jobs are attracting a record number of Wisconsinites into work.

Wisconsinites are Committed to Work

Wisconsin’s labor force participation rate has been higher than the national average since 1979.

One way Wisconsin’s commitment to work is evident is in its share of working age people who are in the labor force.

The next chart offers further detail, providing a breakdown of labor force participation in both the US and Wisconsin by gender over the last 40 years.

Women in Wisconsin are especially committed to work.

Over the last 40 years, men’s labor force participation has been declining while women’s participation rose substantially from 1979-99 and then drifted down in recent years.

J.2 shows that while Wisconsin reflects those national trends, workers in the state – both men and women – consistently show greater connection to work. In 2021, 71 percent of Wisconsin’s men participated in the labor force, while 68 percent of men did nationally.

Unemployment is low, so it's easier for workers to find better work

Wisconsin’s unemployment rate in July 2022 was 3 percent — a level that is near the historic low and below the national rate of 3.5 percent. In this environment, it is easier for workers to find jobs and bargain for better working conditions in the positions they hold.

Nearly complete recovery, but some sectors (and their workers) are left out

In July 2022, the national economy recovered to the number of jobs it had in February 2020 before the pandemic shutdown. J.5 shows the trajectory of jobs recovery for Wisconsin and the US. Wisconsin’s labor market growth outpaced the national average early in the recovery and lags just slightly behind it in recent months. Wisconsin’s total jobs count is just 2 percent below the February 2020 level. Both nationally and in Wisconsin, this measure of recovery shows a strong and rapid return to pre-pandemic levels.

J.6 shows that this recovery in jobs has not been evenly distributed by sector.

From the very beginning of the pandemic, the Leisure and Hospitality sector has faced the most intense changes. Shedding nearly half its jobs in March 2020, the sector has had a dramatic recovery but still holds 6 percent fewer jobs than before the pandemic. Workers in this sector faced the most intense unemployment at the beginning of the pandemic, suffering that piled on top of the low wages, insufficient and volatile hours, and few benefits that these jobs tend to offer. While the underlying structure of these jobs is still a challenge, national evidence suggests that workers are securing some increases in wages and hours of work.

Three other sectors have posted similar losses since February 2020: Other Services (which includes a mix of services including repair and cleaning services) is down 6.8 percent; Government is down 5.4 percent; and Education and Health Services has declined by 3.7 percent. Wisconsin’s declines in Government and Education and Health Services are especially notable because the state’s sectors substantially underperform the national trend.

Wisconsin has four sectors that have grown since 2020: Construction (up 4.5 percent); Trade, Transportation and Utilities (up 0.7 percent); Information (up 1.7 percent); and Professional and Business Services (up 1.5 percent). The growth of Construction is especially strong and far outpaces national trends for the sector.

J.6 Employment Change by Sector February 2020 to July 2022, Wisconsin and the US