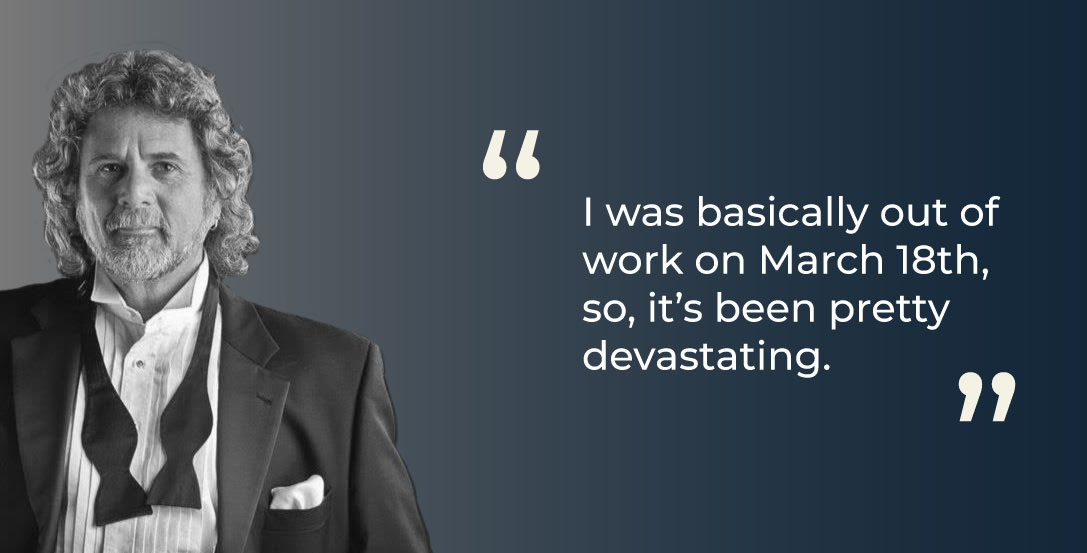 For his entire professional career, Tom Kastle has worked as an actor, musician and entertainer, performing in diverse venues ranging from nursing homes and public libraries to clubs and festivals. The steady flow of freelance performance gigs that supported Tom’s livelihood halted abruptly when COVID hit, freezing much of the entertainment industry.

“I lost three plays, five festivals…Most of my income is gone for 2020 at this point,” Tom told of his chronic stress and uncertainty as the entertainment economy dried up in the early months of the pandemic. “I’ve been a sole proprietor and independent contractor my whole life. I was basically out of work on March 18th, so, it’s been pretty devastating.”

The challenges Tom faces in the arts industry as a consequence of the pandemic are not dissimilar to those faced by workers in other industries. Like so many others, Tom has spent the past several months working to secure funds from public and private sources.

“I received some grants from the Dane Arts Commission. Phi Beta Arts Organization – I also had a small grant from them,” Tom said. But, facing a year’s worth of loss due to the pandemic, Tom hopes also to secure state assistance to help alleviate the loss of income. “On the other hand, I’ve been trying to get PUA, Pandemic Unemployment Assistance, which I applied for in our state back on April 21st, and I still don’t even know if I’m eligible yet.”

“When you’re talking the amount of the economy generated by the arts, it’s insane. When you talk about Broadway closing down, the restaurants, the hotels, the workers, the actors, the crew – it’s just a huge snowball that gives some kind of idea of how hooked into the arts everyone is.”

Tom suggests that the centrality of arts to everyday life will keep the entertainment industry vital through the pandemic, but workers and the industry alike need support while the industry stabilizes.